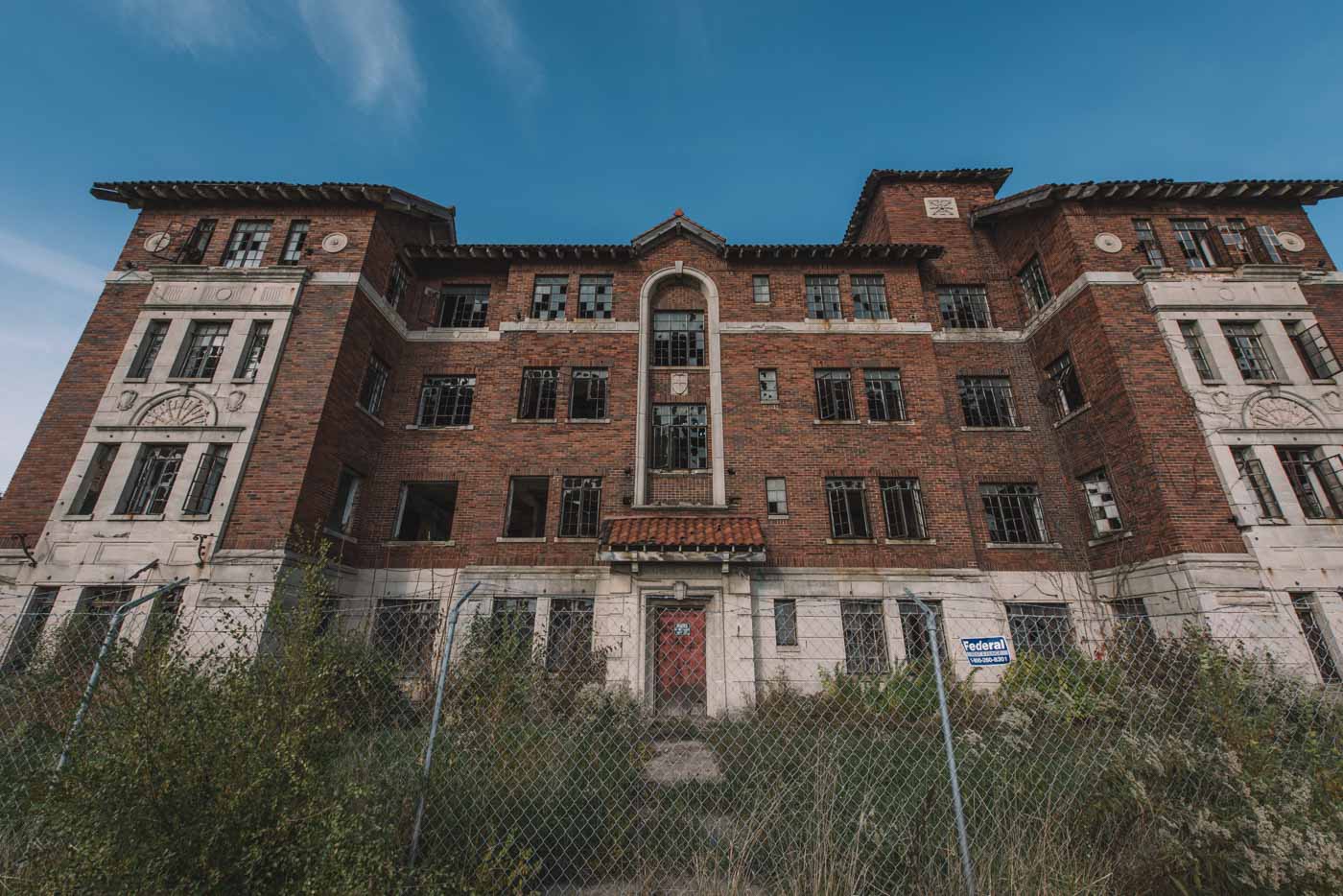 Although it’s referred to as the Mahencia Apartments by the city of Gary, the four-story Mahencha Apartments was constructed in 1928 right across from Horace Mann High School. Built with red brick and stone trimmings, the U-shaped apartment building featured a courtyard in the rear and was designed in a combination of architectural styles, most notably the Italianate style with its low-pitched roof, asymmetrical square tower, and the central stairway with an “eyebrow” above it.

The apartments were built mainly to house U.S. Steel management and city officials. One common tidbit that is usually tossed around is that former mayor A. Martin Katz once lived here. According to his son, Michael Katz, in an interview published in the September 29, 2013 issue of the Post-tribune, he says his mother and father never lived there at all. In 1941, the newly-wed couple put a deposit down and their lease application was accepted, but were told the next day the apartment was no longer available. Soon after, they saw an ad in the newspaper advertising apartments for rent at the Mahencha. They never received an explanation, but they knew it was because they were Jewish. A. Martin Katz would go on to serve as Gary city judge from 1955 to 1963, and mayor of Gary between 1963 and 1967. Katz lost the Democratic primary in 1967 to Richard G. Hatcher, who would be the city’s mayor for the next 20 years and eventually own the Mahencha Apartments.

Richard Hatcher and his wife purchased the Mahencha Apartments in 1978 and renamed it the Hatcher Apartments, even though residents still referred to it as the Mahencha. The Hatchers ran the apartment building for just six years before shuttering it. In that time, the unattended structural issues had gotten worse and Hatcher was either unwilling or financially unable to make any repairs. Residents reported water damage, mold issues, fixtures falling off the walls, and old wiring which caused infrequent blackouts. With these issues coupled with a lack of profitability, Hatcher made the decision to shut down operations in 1985. A former employee would later accuse the Hatchers of purposefully neglecting the property since they purchased it.

It was later reported that Richard Hatcher not paying property taxes on multiple properties he owned in Gary including two homes, several vacant lots, and of course the Mahencha. In March 1987, Hatcher acknowledged he had not paid taxes on the Mahencha in 1983 but this was due to an ongoing appeal with the city tax assessor, and that the unpaid taxes will be paid with the proceeds. He also added that he had been unsuccessful in selling the property. By 1988, the tax bill on the Mahencha Apartments was well over $38,500. The city of Gary would try to sell the property at the Lake County treasurer’s tax auction but was unsuccessful. In 1989, the Hatchers filed an injunction to block the city from seizing the property citing their ongoing appeal with the tax assessor. The Hatchers later filed a lawsuit against the Indiana State Board of Tax Commissioners over the appeal. As the Hatchers were still unable or unwilling to pay their taxes on the Mahencha, the city was adamant about seizing the property and selling it at the next county auction.

While these disputes were happening behind the scenes, the Mahencha sat abandoned where it became a new home for the homeless. Drug abuse and prostitution were recurring problems, along with theft and vandalism. Windows were smashed, piping and any other valuable metals were stripped from the building for salvage, and every fixture was removed. Gary’s building code and enforcement department issued numerous $5,000 code violation fines which were unpaid and added to the Hatchers’ growing bill to the city. The Hatchers initially tried fixing these issues by boarding up the building and sending out a crew to clean up the trash around the property, but a week later, the boards were pulled off, and trash littered the grounds once again. Eventually, the Hatchers stopped trying. By 1990, the Hatchers owed more than $56,000 in taxes and fines for the Mahencha. Despite the Hatchers’ appeals and the lawsuit, the city seized the property in the early-1990s.

In the mid-1990s, the city of Gary donated the property to the Horace Mann-Ambridge Neighborhood Improvement Organization (HMANIO) with hopes that the non-profit organization would be able to renovate the building. After careful planning, it was announced in October 1997 the newly renovated building would include nine one-bedroom units, 12 two-bedroom, and six three-bedroom units. And the first-floor units will be accessible to those with disabilities. The renovation was estimated to cost $3 million and was slated for completion by December 1998. HMANIO was expected to receive low-income tax credits, a historic tax credit, and $750,000 in tax-exempt housing funds from the Redevelopment Commission through city-issued bonds. The funds were to be repaid with the monthly rental fees of the units. Unfortunately, the funding never came through and HMANIO’s plan fell apart.

In 1999 the Gary City Redevelopment Commission approved the sale of Mahencha to the Tree of Life Community Development Corporation. The new plan was to have 29 units varying in size from one-bedroom to three-bedroom units with a projected renovation cost of $3.4 million. The Tree of Life announced in 2000 that they would be making repairs to the roof but the plan fell through when funding never came through. In April 2001, it was announced that $1 million in funding was coming in from the Gary Board of Public Works and Safety. The Tree of Life announced they would be using nearly $500,000 of their share to renovate the building, with construction planned to be completed by 2003. This plan also never materialized.

That was the last attempt at renovating the building. On April 6, 2021, firefighters responded to a fire at the 93-year-old derelict structure. When they arrived, the second and third floors were engulfed in flames. The building suffered excessive damage leaving it entirely gutted.