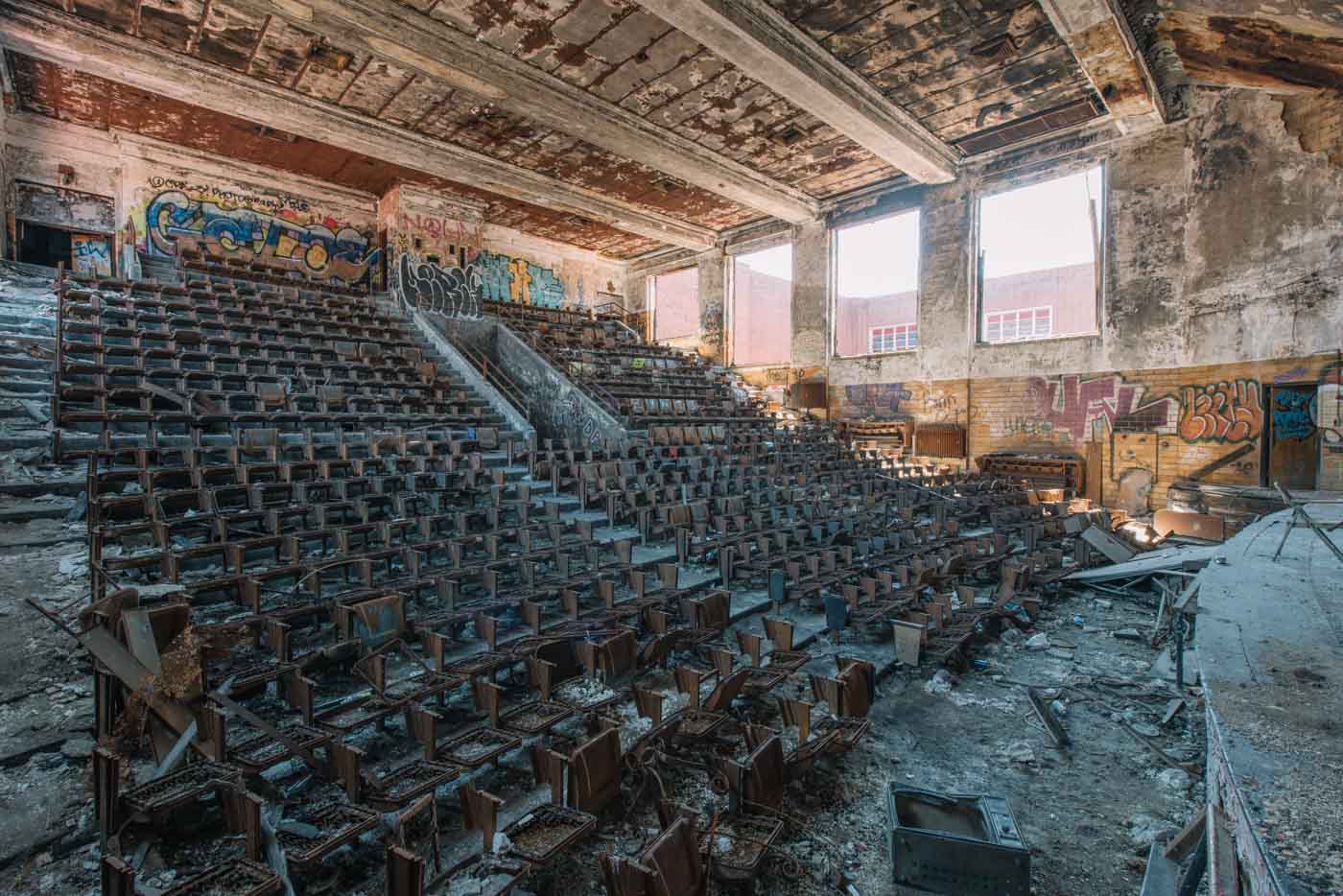 Following the success of Gary School Superintendent William Wirt’s new Work-Play-Study system of education at Emerson High School, Wirt drew up plans for the establishment of four schools over the next two decades. Froebel, Roosevelt, Lew Wallace, and Horace Mann were planned to be similar to Emerson, all three stories tall and constructed in the red-brick-with-white-trim classical composition style.

Bearing the name of Horace Mann, a politician known for his commitment to promoting public education, the school was the city’s third high school when it opened in 1918 to serve the city’s west side. When it first opened, the school consisted of two portable trailers, eventually expanding to five trailers the following year. Wirt realized that permanent structures were needed for the rapidly growing population in the city’s west side, and so construction on the current Horace Mann School began in 1921. The east building was erected in 1922, and the west building followed in 1924 with the central building being completed on November 8, 1926. The central building boasted 48 classrooms, two libraries, an auditorium, a cafeteria, two gyms, and two swimming pools. While the central building served most of the school’s functions, the west building initially served Kindergarten through 3rd grade, but later expanded to include the music department, ROTC headquarters, additional classrooms and offices, and the school new gym which was added onto the rear of the building in 1985. The east building was mainly used for administration offices and the print department which was located in the basement.

Wirt went a step further and brought in landscape architects who used dredging equipment to alter the property’s topography, adding a lagoon and rolling hills. A rock garden was placed near the flag pole in front of the school, pedestrian bridges were constructed over the narrow portions of the pond, and a bird sanctuary was added. Essentially, Wirt had turned the school’s front lawn into a public park. The grounds behind the school contained a gravel playground and athletic field surrounded by a running track.

When Horace Mann School was dedicated in 1928, the city celebrated with what was called “Circus Night” featuring clowns, boxing bouts, dancing, foot races, and a menagerie.

Horace Mann was extremely popular with enrollment reaching 870 during its first year. By 1937, the staff had increased to 80 as enrollment had grown to 2,386. Enrollment continued growing until 1956 when enrollment reached its peak of 2,597 – more than the school was designed to hold. To solve the overcrowding problem, the wooded area in front of the school was cleared out and in 1958, John H. Vohr Elementary School was built in its place. With the construction of the new school, the pond was paved over to provide more parking space for both schools. It wasn’t until 1965, when the school board voted to move lower grades away from Horace Mann, turning it exclusively into a high school.

The 1960s saw a lot of change not only in Horace Mann School, but Gary in general. Like Emerson, Horace Mann School was originally an all-white school, and just like Emerson, it was slow to desegregate and it wasn’t until the 1960s that Horace Mann finally integrated. Racial tensions were high in Gary as unemployment increased along with crime. Then in 1967, Gary elected Richard Gordon Hatcher as the city’s first black mayor and marking the beginning of the “white flight” as thousands of white residents moved away from the city. Enrollment at Horace Mann had changed as well from a 100% all-white school in the 1950s to 98% black and 2% Latino when the school closed in 2004. As the city’s population plummeted so did enrollment at the school with 1,226 students and 55 employed there. Despite this, the school board was able to construct the aforementioned modern gym in the rear of the west building as well as a renovation to the cafeteria.

By 2002, schools in Gary were falling apart and the city hadn’t constructed a new school in over 30 years. Running out of funds and options, the school board made the decision to restructure the school system starting by closing schools with low enrollment which included Horace Mann. Students and teachers didn’t get the news that the school was closing until a newspaper article was published in March 2004. The article announced that the school board voted on April 13th to close Horace Mann along with a middle school and three elementary schools. Parents were furious as their neighborhood school was closing, lobbying to keep it open as the school board defended their decision by pointing out the budget cuts and falling enrollment. Objections from residents and even a lawsuit failed to persuade the school board from changing their mind and on June 10, 2004, Horace Mann High School closed for good.

In 2005, the nearby Froebel School, one of the city’s first schools to accept black children, had been closed since 1977 and was demolished as the city paid a $1 million contract to have it razed. Residents wondered if Horace Mann was next but ironically, the only reason the school hasn’t been demolished yet is for the same reason it closed down – the city’s lack of money. In May 2017, an act of arson heavily damaged the school’s auditorium. There was an attempt to revitalize the school and reopen it as an administrative center, but a study done of the buildings deemed them “inadequate for occupation” and “in need of replacement”, and concluded that the school was beyond repair.