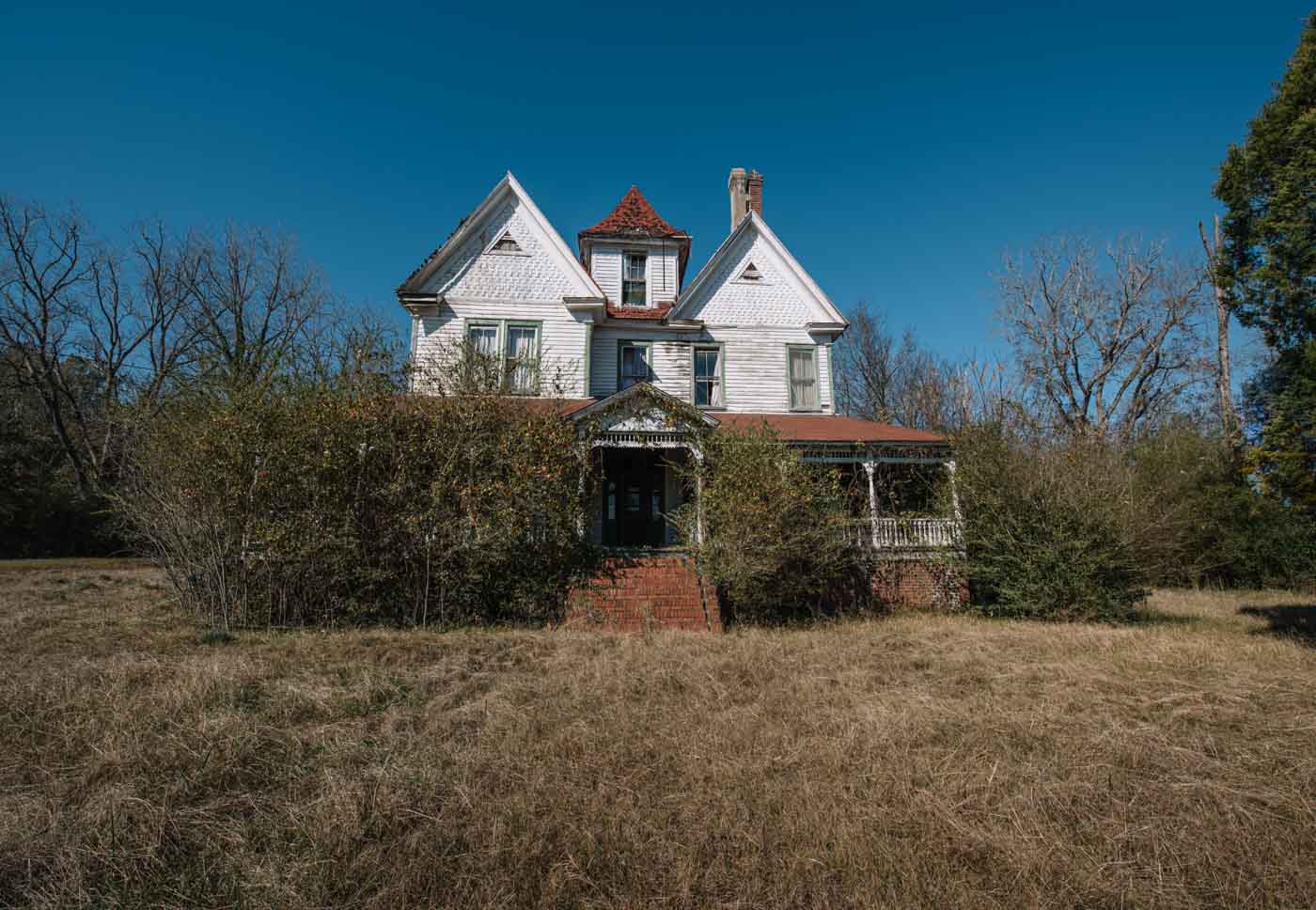 Just on the outskirts of Sparta is the Birdsong House, also known as the John McCown House, located in the unincorporated community of Mayfield which consists mostly of middle to low-class citizens. Back in the early 1800s though, Mayfield and all of Hancock County were thriving as plantations flourished due to the large demand for cotton. Like the town of Madison, this growth was interrupted by the Civil War, the difference being that Hancock County never recovered after the war. The majority of the population in Hancock County at the time was mostly slaves, and much of the labor in the fields was also done by slaves. With no more slave labor, this forced many wealthy plantation owners to leave the county. Cotton made a resurgence in the late-1800s until the boll weevil hit the area in the 1920s, and cotton fields were abandoned once again. Many plantation homes from this era still stand today, though one home, in particular, is worth noting that locals refer to as the Birdsong House. The Birdsong family were some of the earliest settlers in Hancock County, many of whom were prominent members of the community.

In the early-1930s, it was bought by Claude and Ruby Hill, who was a USPS carrier and ran a mercantile store respectively. They lived in the home with their children and grandchildren until 1957, when the house was sold and the family moved to Thomson. Following the Hill and Elliot families, it was owned by Thomas Benjamin Rushing and his wife, Irene Rushing. They also owned the nearby corner store, now also abandoned, and cooked barbeque there on the weekends. In the late-1960s, he and his family also moved to Thomson and sold the home to John McCown.

John McCown was born on November 18th, 1934, in the Peedee region of South Carolina, just Northwest of Myrtle Beach. His father died in a traffic accident when John was just three years old. Not able to support her family, his mother moved to Harlem for better work opportunities and John moved in with his grandparents. Growing up in the segregation era, McCown attended the all-black Loris Training School where he would join the basketball team and eventually become class president. Missing his mother, it wasn’t long before he moved to Harlem to be her.

McCown decided to join the Air Force and moved to Colorado. While stationed in Colorado Springs, he organized the city’s first civil rights demonstration following the 16th Street Baptist Church bombing in Birmingham, Alabama, where four young black girls were killed and 22 others were injured. Considered courageous and outspoken about his opinions, he gained favor with the local National Association for the Advancement of Colored People (NAACP) and was appointed military advisory to Edward Bradford, president of the Colorado Springs chapter. Throughout the 60s, he advocated for the abolishment of military bias towards blacks throughout the country.

After serving nearly ten years in the Air Force, he received a general discharge and made his way to the South to join Dr. Martin Luther King Jr. and the Southern Christian Leadership Conference (SCLC) in Selma, Alabama, where massive marches were being organized due to voting restrictions placed on black Americans. While in Alabama, McCown also befriended Stokely Carmichael, who believed less in nonviolence and interracial alliances, and more on black militancy. Carmichael would go on to coin the term “black power” and help rural African-Americans outside of Selma to form the Lowndes County Freedom Organization, an all-black, independent political group that became known as the Black Panther Party. Inspired by Carmichael, McCown would eventually rely on strong arm and intimidation tactics. While traveling throughout the South, he became involved in multiple rallies and protests, and would later brag that he was the one who pushed Mayor Ivan Allen off the car during the Atlanta riots in 1966. He would go on to be selected executive director of the Georgia Council on Human Relations (GCHR), a non-profit and biracial organization working against prejudice and discrimination due to race, religion, ethnicity, and nationality.

McCown eventually made his way to Hancock County, regarded as one of the more tolerable communities towards blacks. The Ku Klux Klan never had an influence in the county as the film Birth of the Nation, a movie that portrayed blacks as unintelligent and aggressive towards white women and the Ku Klux Klan as heroic, never played in the county’s only movie theater. Hancock County would become the only county in Georgia without a lynching. Despite this and the passage of the Civil Rights Act of 1964 and the Voter Rights Act of 1965, schools, restaurants and water fountains were still segregated. White county leaders would also vote against any improvements that benefitted the black community. McCown decided that the only way change could occur was that the black community needed to be more involved in the political process, but there needed to be a black majority on the county commission to do that. In 1972, his idea was realized when he helped elect blacks into fourteen of the county’s eighteen posts. It was also the first time Hancock County had a black majority in control of the school board.

McCown founded the East Central Committee for Opportunity (ECCO) and was able to bring in funds from both private and federal entities into the county. He also began investigating why the Federal Housing Administration (FHA) was granting loans to such a low number of black residents. The investigation found a bias towards blacks, changes were made, and Hancock black residents began receiving housing loans. Over the next few years, Hancock County saw a large sum of grant money flow into it. Through ECCO, McCown constructed a 150-unit low-income housing development and a catfish farm which was described by TIME magazine as “one of the largest and most scientific catfish farms in the world”. ECCO would later purchase large tracts of lands which included a cement block factory, control of the county hospital, and the only movie theater in the county.

The white citizens of Hancock County were fearful of McCown, feeling he was too powerful of a figure, especially for such a small town. Fear escalated with reports of gunfire throughout the countryside and repeated threats by black citizens toward the all-white police force. In 1971, Mayor Buck Patterson purchased ten sub-machineguns for the town’s six man police force. McCown responded by purchasing thirty sub machineguns and created pamphlets advertising the “Hancock Sporting Rangers” as a “hunting club” and encouraged people to purchase shotguns and rifles. This arms race ended when former then-Governor Jimmy Carter traveled to Sparta to serve as a mediator between the two parties, leading two both sides giving up their submachineguns.

Jeff Nesmith of the Atlanta Constitution wrote an article titled, “Nightclub Getting Hancock Poverty Funds,” about grant money given to ECCO used to fund a nightclub and two airplanes at the international airstrip in Mayfield, which McCown also developed with the use of federal funding. This article also brought up the question as to why such a small town needs an international airstrip, especially when half of its residents are living in poverty. As Nesmith would later write: “In 1966 John McCown came to this sleepy town in poverty-ridden Hancock County as a black civil rights worker, supported by a wage that proved just enough to live on.  Today he owns 525 acres of Hancock County farmland, is building a house that will cost nearly $60,000, holds the title to several pieces of commercial property in Sparta, and flies his own twin-engine airplane, price tag $33,000.  How in eight years a hungry black civil rights worker could become that prosperous in a rural Georgia county where poverty and racism have maintained an iron grip since the Civil War has become a question a lot of people want answered.”

In 1971, McCown was questioned by members of the GCHR on some financial inconsistencies, followed by his resignation as executive director. Accounts were audited and what was found were some questionable land deals which resulted in an undocumented $50,000 for ECCO, and a loss of over $290,000 in the catfish farm with over $120,000 paid toward travel and consultant fees.

In the summer of 1974, McCown was jailed for unlawful assembly, failure to disperse and obstruction of justice. With McCown in jail, violence swept through Sparta as 600 protestors converged on the jail. During this time, there were also two shotgun attacks; one at the home of a former policeman and one at a store owned by the brother of Police Chief Garrett. McCown would later lead a march through downtown Sparta to the Sparta Baptist Church. Armed with guns, they forced the members of the congregation out, barricaded the doors, and held their own service. Following the service, they left the church and lay in the middle of the highway blocking all traffic. McCown would later tell a reporter from the Augusta Chronicle, “I’m not a violent man but if someone stands in my way, I believe I should kill them.” He would follow that up when, standing with multiple pistols in his belt shouted to television cameras, “I’ll destroy the town of Sparta, I don’t give a damn about whites.”

A subsequent investigation found that McCown had brought in over $8.7 million in grant money in Hancock County. Much of it was squandered off due to poor planning, mismanagement, and overspending. With the ongoing investigation, the Ford Foundation which provided grants to ECCO announced they would no longer be funding them. When attempting to post bail for two members of his group, McCown found that he had a negative net worth. A few months later on January 31, 1976, all employees of ECCO were terminated as the Office of Economic Opportunity, which also provided grants to ECCO, had run out of money.

The night before on January 30, 1976, after receiving news that funding had run out, McCown spent the night drinking with friends at the ECCO owned night club. Deciding to go for a quick flight, McCown drove the three men to Cessna 182 single-engine plane. Not owning a pilot’s license, he simply took off. Within minutes from takeoff, the planes plunged into the pine forest, killing McCown and two of the men; the third man was thrown out of the plane and was found alive. McCown was found to have a blood-alcohol level of 0.198, nearly twice the legal limit to drive a car in Georgia. The National Transportation Safety Board also found no malfunctions or and mechanical failures in the plane. Questions were raised as to how McCown came into ownership of the aircraft. The plane was found to have been registered to a black college in Mississippi, which had given McCown an honorary degree. Logs showed the aircraft was donated to the college and no connections to McCown were found. Regardless of McCown’s death, the investigation into ECCO continued. Over a dozen individuals were indicted, all of whom pleaded down and served minimal sentences, returning to their government jobs within the county.

ECCO owned many businesses and properties, including a hospital facility, a wood products manufacturing operation, a metal fabricating plant, a clothing store that offered children’s apparel, and a local bank that funded small business-ventures, all of which were shut down. The catfish farm which was highly praised at the time of its construction was nothing more but dried-up ponds. By 1977, the once-bustling town of Mayfield now resembled a ghost town. John McCown is buried behind the Birdsong house in Mayfield, his grave now tended to by locals. The house is currently abandoned and is planned to be torn down in the future. It’s undeniable how much John McCown helped the black community of Hancock County, but his true motives and methods are still considered questionable and controversial.