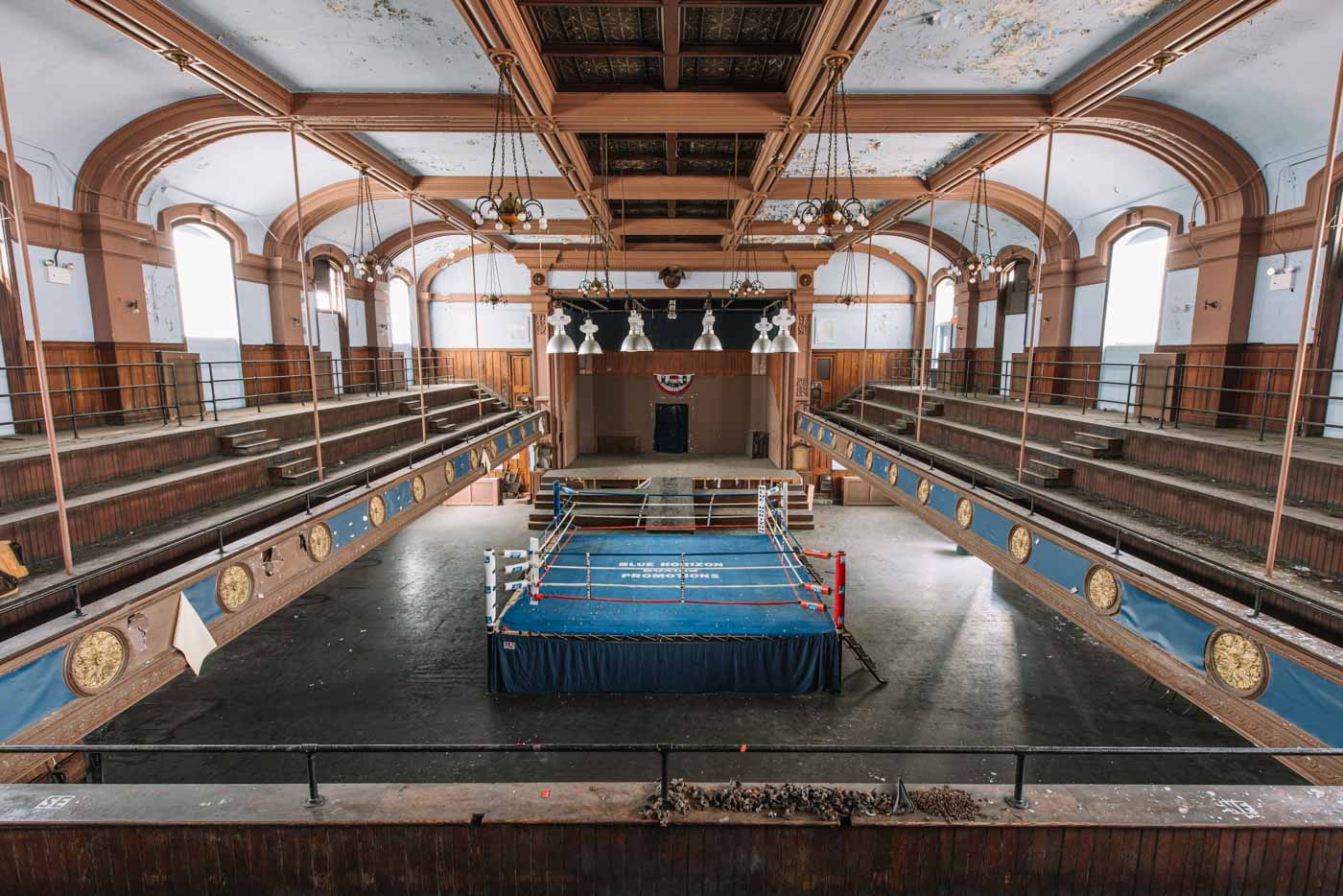 In 1863, the Farmers and Mechanics Land and Building Association granted three undeveloped lots to prolific real estate developer Richard J. Dobbins on North Broad Street. The site went undeveloped despite the construction of a row of houses nearby and its access to two streetcar loops until March 1878 when Dobbins built three three-story Second Empire style brownstone houses.

North Broad Street was marketed towards the nouveau riche and as such, became home to many wealthy and influential individuals. The three brownstone houses eventually became occupied by the households of Thomas Armstrong, Gustav Schwarz, and Moses Aaron Dropsie. Thomas Armstrong was president of the Pennsylvania Salt Manufacturing Company and a member of over a dozen clubs and professional organizations. Gustav Schwarz owned the G.A. Schwarz Toy Emporium and as one of four brothers who owned toy stores in New York City, Baltimore, Boston, and Philadelphia, the most famous being New York’s F.A.O. Schwarz. Moses Aaron Dropsie was a U.S. attorney and businessman who founded Dropsie College and was also instrumental in the development of railways in Philadelphia.

Between 1912 and 1913, the three properties were acquired by the Loyal Order of the Moose for the purpose of establishing a new clubhouse. The Loyal Order of the Moose is a fraternal organization first founded in 1888 in Louisville, Kentucky by Dr. John Henry Wilson. Local chapters are known as “lodges” were established in a number of Midwestern cities including Cincinnati, Ohio, St. Louis, Missouri, and Crawfordville and Frankfurt, Indiana. The early years proved to be unsuccessful to the point that Dr. Wilson left the order he founded before the turn of the century. When Albert. C. Steven was compiling his book, Cyclopedia of Fraternities, in the late-1890s, he was uncertain if the Order was still in existence. By 1906, the Order’s membership had dwindled to less than 250 members and only had two active lodges in Indiana. That same year, James J. Davis became the 247th member of the Order and was appointed “Supreme Organizer”.

Davis was a Welsh immigrant and worked in the steel mills of Indiana and Pennsylvania, and was an active labor organizer who would later serve as U.S. Secretary of Labor under Presidents Harding, Coolidge, and Hoover and serving as a U.S. Senator representing Pennsylvania. Davis promoted the Loyal Order of the Moose towards working-class residents using a low annual membership fee of $10–$15, assuring benefits to families in the event of a member’s death or is disabled. In addition, Moose lodges provided places with a genial atmosphere for recreation and socialization. Between 1907 to 1912, the Order grew to nearly half a million members in over 1,000 lodges across the country.

Davis was personally responsible for recruiting the first 100 members of Philadelphia’s Lodge #54 in 1908. The lodge initially met at 857 North Broad Street, but rapidly growing membership warranted for a larger facility. In May 1912, the three brownstone houses were purchased and architect Carl Berger oversaw the work of combining and converting the three houses for use by Lodge #54. Work also included the addition of a 1,500-seat auditorium, ballroom, bar, and rathskeller. By 1920, Lodge #54 had over 20,000 members, the highest membership of any fraternal lodge in the world at the time. By the late-1920s, membership had grown to over 40,000, and plans were made for an expansion of the building, but the Great Depression forced the lodge to dump those plans. The property ceased operations as an active lodge following World War II but remained under the organization’s ownership throughout the 1950s.

The first professional boxing matches occurred on March 1 and March 28 of 1938, with the latter featuring heavyweight Willie Reddish, who later trained Sonny Liston and Joe Frazier. In 1961, the vacant building was purchased by Jimmy Toppi Enterprises for $85,000. The prominent father-son promotional team operated a number of boxing and events venues across the city, including the Olympia Athletic Club, the Imperial Ballroom, the Alhambra, the Plaza, the Metropolitan Opera House, and Toppi Stadium. The lodge’s auditorium was converted into “Toppi’s Auditorium”, although the name was shortlived as the venue was rechristened as the Blue Horizon, named it after the song “Beyond the Blue Horizon” from the 1930 film Monte Carlo.

No events were held at the Blue Horizon until September 1969 sports writer and life-long boxing fan J. Russell Peltz began a boxing promoting career on September 30, 1969, with the main event at the Blue Horizon featuring Bennie Briscoe and Tito Marshall and setting a new attendance record with 1,606 spectators. Peltz would go on to promote 31 shows until leaving in 1971 to promote at bigger venues such as the Spectrum. Former lightweight boxer Bob Montgomery promoted three more shows at the Blue Horizon before the venue went dark once again.

By 1974, J. Russell Peltz was running the boxing program at the Spectrum and returned to the Blue Horizon to develop fighters in front of smaller crowds before moving them to the Spectrum. Peltz promoted 32 shows between 1974 and 1981. Peltz’s long-time matchmaker Harold Moore ran four shows between 1982 and 1984. With boxing all but dead at the Spectrum, Peltz made his return to the Blue Horizon on March 6, 1984, running shows consistently until 2001. Although he wasn’t the exclusive promoter at the venue as there were dozens of others, he promoted more fights at the Blue Horizon than anyone else in its history. On June 25, 1986, the main event between Juan Veloz and Johnny Carter was recorded by USA Network for a delayed broadcast. The venue became a regular host of USA Network’s “Tuesday Night Fight” series in the 1980s and 1990s.

In 1988, Toppi sold the venue to Ross Collette, pastor of New Horizons Baptist Church. The congregations held meetings in the ballrooms while boxing matches continued in the auditorium. The site was purchased in 1994 by Vernoca L. Michael, Carol P. Ray, and Carol M.A. Whitaker. Michael worked to make the building a cultural center for the surrounding neighborhood by creating a learning center with connections to Temple University, University of Pennsylvania, and the Philadelphia Boxing Museum, hosting special events, meetings, cabarets, and weddings at the venue. In 1998, Michael became licensed as the first female African American boxing promoter in the state of Pennsylvania.

The Blue Horizon held its first world title fight on December 6, 1997, when Peltz promoted Charles Brewer in a defense of his International Boxing Federation super-middleweight crown. The venue became an official Philadelphia historical site in 2000, and a historic marker was placed in front of the building.

The Blue Horizon was closed due to tax problems in 2010. It was the last surviving and longest operating of the neighborhood boxing clubs in Philadelphia. In January 2011, Mosaic Development Partners proposed to construct an $18 million hotel-and-restaurant complex with a jazz bar and fitness center, promising to preserve the boxing venue. This later changed in July 2013 when it was announced that the Blue Horizon would be demolished to be replaced by a parking garage. Although the Philadelphia Department of Licenses & Inspections issued a demolition and construction permit in February 2015, the plans stalled due to lack of financing. In March 2015, the Philadelphia Historical Commission’s Committee on Historic Designation voted to designate only the building’s facade to the Philadelphia Register of Historic Places. In February 2019, a revised $22 million proposal called for the demolition all but the facade of the building and constructing a five-story, 140-room Moxy micro-hotel.