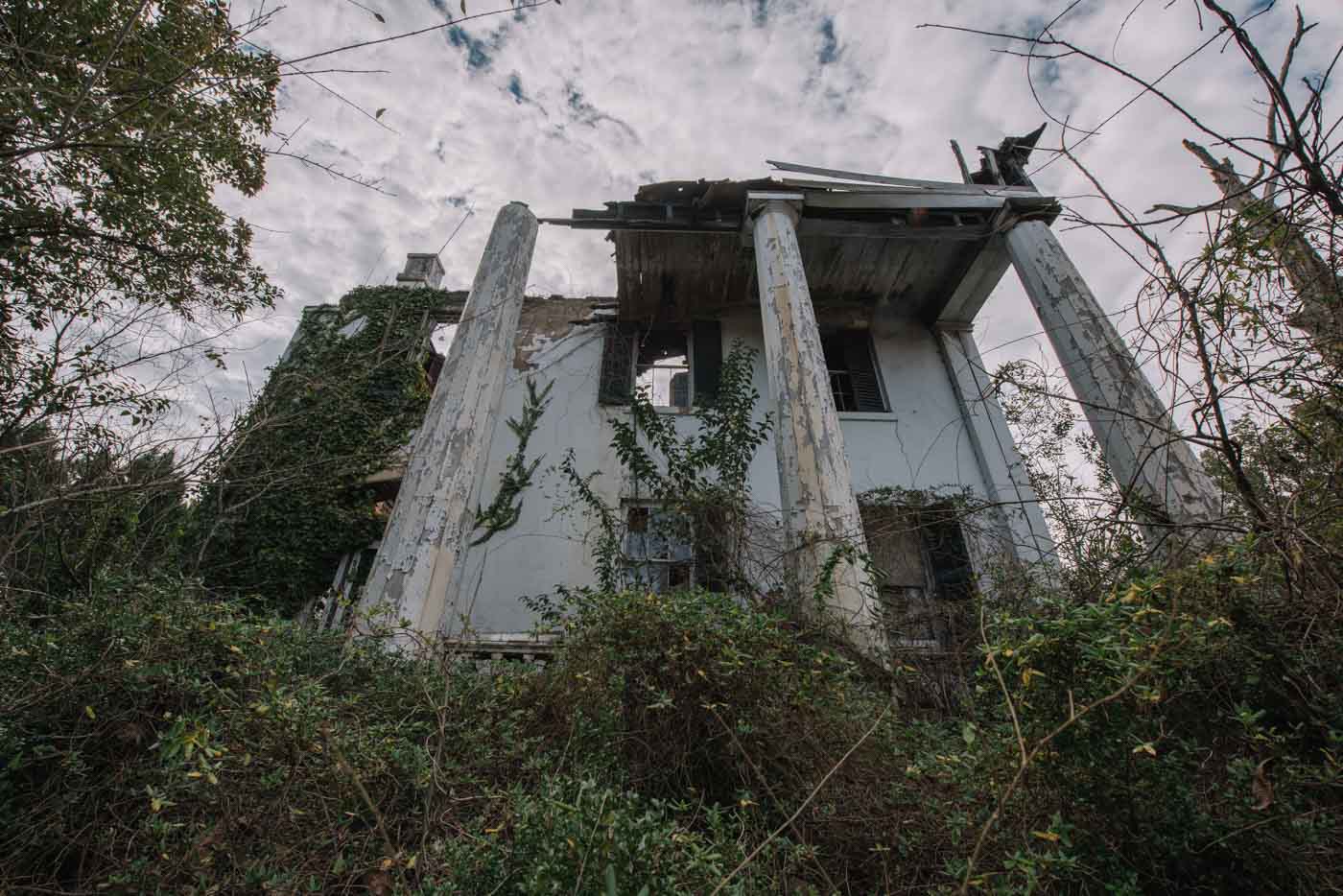 Pomegranate Hall was built in the 1830s by Nathan Sayre after moving to Sparta, Georgia from New Jersey in the early 1830s where he became a state attorney, a member of the Georgia legislature, and a superior court judge. Although he never married, he had several children with one of his slave women and later lived with his common-law wife, Susan Hunt, who was part Cherokee, African and white. It is believed the complicated layout of the home reflected on the equally complicated family dynamics. In his library at Pomegranate Hall, he was also known to keep books that argued against the common belief that the mixing of races would eventually produce inferior or degenerate children.

Pomegranate Hall was commonly referred to as the “half-house”. No one really knows why. One theory is that the much of the house was brought over by ship in the 1830s and then completed in Sparta, leaving
the other half of the house in England. Another theory behind the name was due to the front door being located on the left side of the house rather than the center. At the time, Pomegranate Hall was painted a “monastic brown” which gave it a Mediterranean appearance and stood on several acres of land containing vineyards and Pomegranate trees which Sayre used to make his own wine. The mansion was constructed of local stone and brick with walls two feet thick. Along the front of the house were 24 foot high columns. The back of the mansion was a whole three stories high and was where it was said Sayre kept the family he had with his slave. The main floor contained an elaborate entrance hall, two reception rooms on the right,
and Sayre’s extensive library. A guest at the house in 1839 described her upstairs room as “delightfully situated; our windows attracted all the breezes and commanded imposing and beautiful views of the whole town and surrounding country”.

After Nathan Sayre’s death in 1853, the house was bought by the Simpson family who owned it when writer Eliza Frances Andrews stayed there during the Savanah Campaign, better known as ‘Sherman’s March to the Sea’. She describes her experience on her way to Sparta in her book, The War-Time Journal of a Georgia Girl, 1864-1865: “About three miles from Sparta we struck the “Burnt Country,” as it is well named by the natives, and then I could better understand the wrath and desperation of these poor people. I almost felt as if I should like to hang a Yankee myself. There was hardly a fence left standing all the way from Sparta to Gordon. The fields were trampled down and the road was lined with carcasses of horses, hogs, and cattle that the invaders, unable either to consume or to carry away with them, had wantonly shot down to starve out the people and prevent them from making their crops. The stench in some places was unbearable; every few hundred yards we had to hold our noses or stop them with the cologne Mrs. Elzey had given us, and it proved a great boon. The dwellings that were standing all showed signs of pillage, and on every
plantation we saw the charred remains of the gin-house and packing-screw, while here and there, lone chimney-stacks, “Sherman’s Sentinels,” told of homes laid in ashes.”

The house then went to Seaborn Reese, a Representative from Georgia. Reese was born in Madison, Georgia in 1846. He attended the University of Georgia and after gaining admittance to the state bar in
1971, he began practicing law. From there, he moved to Augusta before finally settling in Sparta. Reese was elected to the Georgia House of Representatives in the State General Assembly and served in that role between 1872 and 1874. From 1877 to 1880, Reese was the solicitor general of Georgia’s northern judicial circuit. In 1982, he replaced Alexander Stephens in the United States House of Representatives during the 47th United States Congress and was reelected in the 48th and 49th Congresses, serving until 1887. He served as judge of the northern judicial circuit between 1893 and 1900. Reese died in Sparta on March 1, 1907, and was buried in the city’s Methodist Church Cemetery.

In 1963, the widow of Oliver Macy, of the Macy’s Department Store family, moved in and lived in Pomegranate Hall until she died in 1992. The next owner was Emily Karolyn Hair, widow of the late historian Dr. William Ivy Hair. On July 5th, 2001 the home was heavily damaged due to a fire which destroyed much of the upper floor and roof. One online source stated that the house burned in 1990, but this was the time when Oliver Mary occupied the home. Other sources claim the blaze happened sometime between 1999 and 2000, but a newspaper clipping confirms it occurred in 2001. According to locals, the fire was set by “accident” by Emily Hair, who was burning a pile of her son’s clothes on his bed because he had a severe drug addiction and this was her way of coping with it. The fire spread quickly, traveling down the stairwell and into the furnace room, and then finally engulfing the entire second floor. The home was bought by Jerry Erickson in 2005 from Steve Hair, who inherited the home from his late mother. After years of attempting to restore or at the very least, protect the home from the elements, funds had run out.