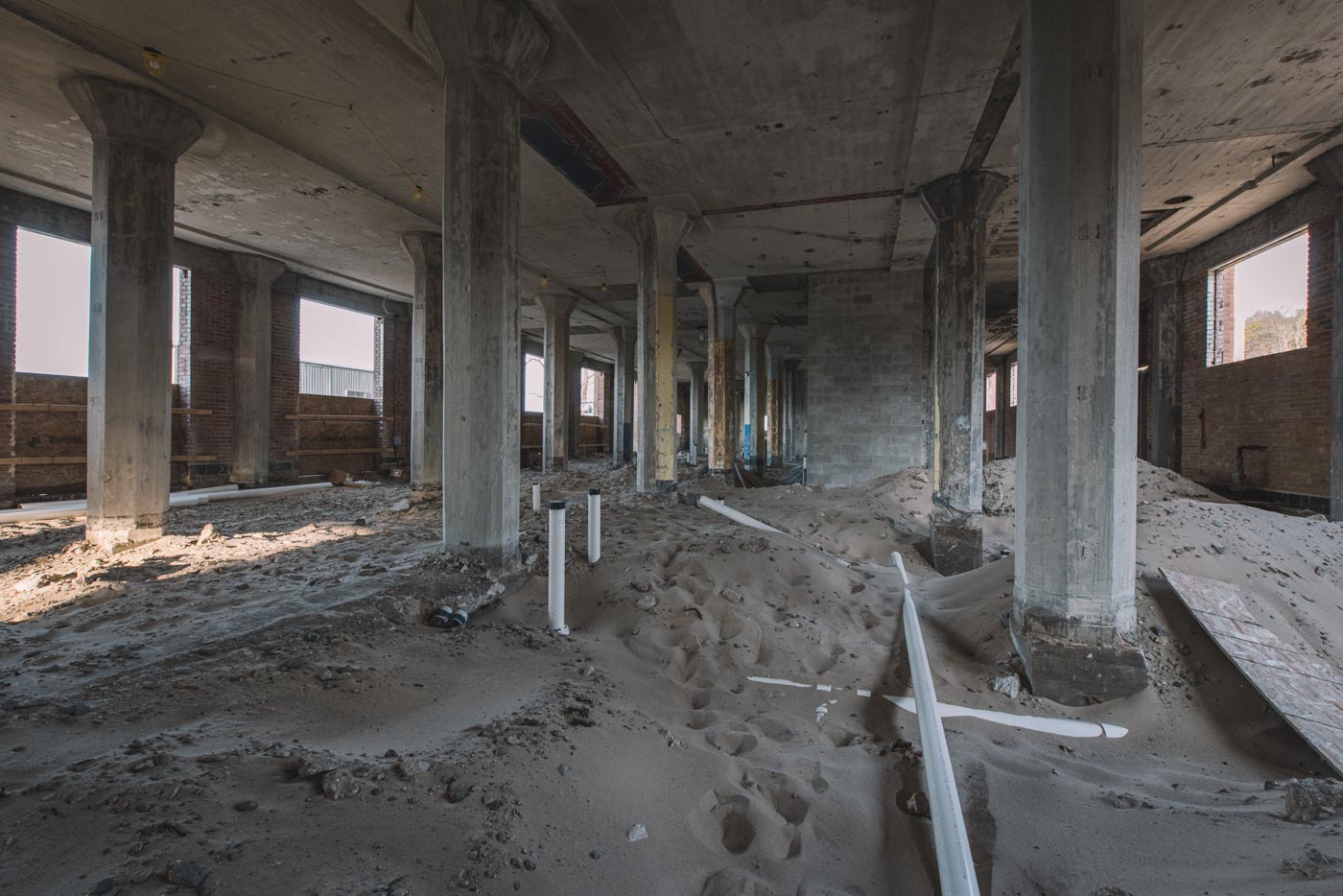 The history of the Indiana Dunes dates back to 200 BCE as evidence points to Native American communities using the area as a key hunting ground. Beginning in the early 1500s, European exploration and trade introduced a large rift in tribal relations. Entire populations moved westward, while others aimed to dominate large geographic trade areas with the dunes becoming a middle point on a journey from east to west. In 1822, French Canadian and fur trader Joseph Bailly established a trading-post near present-day Porter, Indiana, and was the earliest recorded settler in the dunes. He was soon joined by other settlers and communities in the dunes began to develop, which included Tremont, Porter, Chesterton, and the Town of Pines. City West was one of several ghost towns situated in the dunes. Planned to rival Chicago, the town was partially built in 1837 on the site of the Indiana Dunes National Park, before being abandoned that same summer during a national economic crisis. The remains of the town, located near where the pavilion now stands, were destroyed in a forest fire in the 1850s.

In 1899, an article was published in the Botanical Gazette by University of Chicago botanist Henry Chandler Cowles about the unique flora of the dunes, triggering a movement to preserve the area. Stephen Mather, first director of the National Parks Service, suggested the creation of a “Sands Dunes National Park”, a vision he would not live to see fulfilled but one that would eventually come to fruition. This sparked a conflict on whether the lakeshore should be industrialized, or preserved for future generations. Many pointed to the success of U.S. Steel along Gary’s shoreline in support of maintaining the entire length of the lakeshore for industrialization.

The creation of the park was delayed due to World War I. Instead of setting aside land for a national park, the state of Indiana went ahead instead and created Indiana Dunes State Park in 1926. That didn’t satisfy those who have been pushing for a national park. In the late 1940s and early 1950s, the efforts made toward creating a national park gained the attention of Ilinois Senator Paul Douglas. Finally, a compromise was reached under the Kennedy administration which involved the creation of a national park only if a port could be constructed on the lakeshore. Douglas led the Congressional effort, making sure the Port of Indiana would be constructed only after the authorization of the Indiana Dunes National Lakeshore. Lyndon B. Johnson signed the bill and since its authorization it has been expanded four times, in 1976, 1980, 1986, and 1992, encompassing over 15,000 acres across three Indiana counties.

Many decades later, a bill was put forth to reclassify the Indiana Dunes National Lakeshore as the Indiana Dunes National Park sponsored by Representative Pete Visclosky and Senators Todd Young and Mike Braun and previously by Senator Joe Donnelly. The National Park Service opposed the redesignation as it was inconsistent with the Service’s naming conventions and the Indiana Dunes having more in common with national lakeshores and seashores than national parks, which are typically much larger. H.R. 1488 passed the House of Representatives on November 1, 2017, but did not receive a vote in the Senate. The Consolidated Appropriations Act of 2019 included the bill as a provision, and President Donald Trump signed the legislation on February 15, 2019, creating the country’s 61st national park and the first in Indiana.

Back in 1926 when the Indiana Dunes State Park was created, a plan was put in place for the construction of a facility to serve the visitors of the park, especially those visiting the beach. Constructed in 1929 at the cost of $100,000, the two-story Indiana Dunes Pavilion served as a bathhouse and restaurant, featuring a fine-dining restaurant, restrooms, and concessions. The rooftop was used as an observation deck. Over the years, the Indiana Department of National Resources (DNR) was unable to adequately fund interior renovations or maintenance. The DNR received financial assistance in 1973 from the federal government through the Land and Water Conservation Fund and after improvements were made, the building once again fell into decline. By the 21st century, a small concession operated only during the summer, as did a lifeguard office, and most of the building was used for storage.

An effort was made to restore the facility to its original use, and so the State of Indiana contracted Pavilion Partners, LLC in 2014, for adaptive reuse of the structure and the addition of a banquet hall that would compliment not only the historic building but also the natural features of the areas. The DNR made an amendment to the contract declaring that “beach offering” including concessions be ready by Memorial Day weekend, and for restaurants to be completed by May 2020, or Pavilion Partners will face thousands of dollars in penalties.

Dunes Action, a grassroots organization that supports the restoring of the pavilion opposes the plan Pavilion Partners has put forth which involves a high glass-walled bar on the roof of the building and two balconies overlooking the lake. Not only will the building’s character be destroyed, but the proposal already features a bar on both the first and second floors. Dunes Action contends that Pavilion Partners are not abiding by the Secretary of the Interior’s Standards for the Treatment of Historic Properties, exclaiming that “a property used for its historic purpose should require minimal change to the defining characteristics of the building”; and “the historic character of a property shall be retained and preserved.”