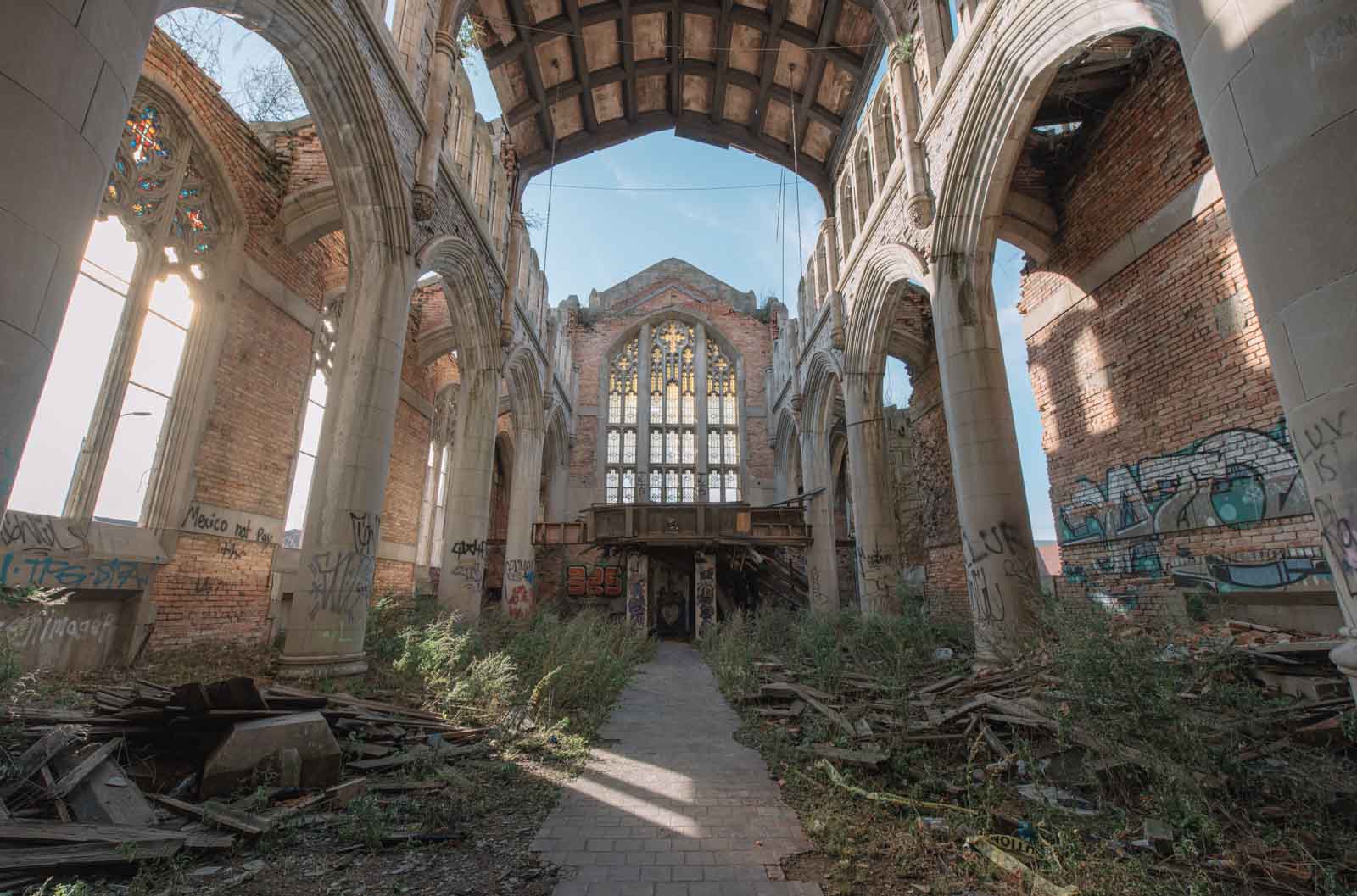 Since the city of Gary’s founding in 1906, there has always been a Methodist church within the city. In 1916, Dr. William Seaman became its pastor, a man with a dream of a new church to serve the burgeoning city. He wanted a religious presence in the neighborhood which was dotted with numerous brothels and taverns. With financial assistance from U.S. Steel, the chief employer of the city, what would later be known as City Methodist Church was erected in 1926 on land donated by the steel company. Designed by the Lowe & Bollenbacher architectural firm of Chicago, the sanctuary was just part of a large nine-story complex that included an adjoining theater called Seaman Hall, which could seat 1000 people, and contained corporate offices, a gymnasium, a Sunday School and a dining hall. Judge Elbert Gary, who the city was named after and chairman of U.S. Steel personally donated an ornate, four-manual Skinner organ. The church held its first service on October 3, 1926, and by 1927, it had a congregation of 1,700 with a staff of six, including an assistant minister, directors of athletics and Christian education, a music master, and a secretary.

Since its opening, William Seaman had an ever-growing group of detractors who complained about the building’s Roman Catholic overtones and that it was merely a monument to himself. Immediately after opening, this group began labeling the building “Seaman’s folly.” Despite its beauty, the building was constructed at a great cost and stature for a congregation and city of that size. Maintenance costs would be a financial burden on the church throughout its lifetime, eventually becoming one of its downfalls.

To some degree, the church navigated race relations in a polarized city, opening its doors to civic, social, and spiritual gatherings. Seaman was fairly successful in promoting the community hall as a religiously neutral ground for artistic and civic events, welcoming Latinos and Eastern Europeans. Although Black residents were not allowed to worship there, they were still allowed to utilize the church’s amenities. By 1929, Seaman grew unpopular among his parishioners due to his views and methods and was involuntarily transferred to an Ohio church. Ironically, Seaman’s successor was so unpopular, the congregation wished for Seaman to return. William Seaman died in an automobile accident in 1944, his body was cremated and returned to Gary to be interred in the City Methodist Church’s sanctuary, as per his wishes. The church would fail to broaden its white middle-class consistency, leading to its eventual demise.

The church struggled financially during the Great Depression and so in need of funding, the church leased space Seaman Hall to Gary College, which offered a satellite campus in the offices of the building. After World War II, the Indiana University Center used a portion of Seaman Hall, and by 1949, Indiana University Northwest occupied three of the floors. Around this time, the city of Gary was enjoying a religious revival of sorts, and by the 1950s, the church’s popularity peaked with membership surpassing 3,000.

Gary rapidly declined in the 1960s and 1970s, and the church likewise. As stated previously, the congregation consisted of mostly white middle-class members, many of which were lost due to white flight as crime rates in the city soared and Gary’s social makeup changed. By 1973, membership had fallen to 320, about a third of whom regularly attended. Offerings weren’t enough to pay the utility bills, let alone the numerous repairs needed on the aging structure. After attempts to sell the building to another congregation proved fruitless due to the expense needed on maintaining the building, the decision was eventually made to close the City Methodist Church on October 5, 1975.

The structure was passed into the hands of Indiana University which continued to make use of Seaman Hall as a satellite campus, but nothing was done with the church itself. In 1994, City Methodist Church was added to the National Register of Historic Places as a contributing structure of the Gary City Center Historic District. Over the years, the church slowly degraded with attempts to renovate it, but none came to fruition before the Great Gary Arson of 1997.

On the night of October 12, 1997, a fire started on the second floor of the abandoned Goldblatt’s Department Store just north of the Broadway Shopping Mall and quickly spread, engulfing the Memorial Auditorium to the east and the Radigan building to the north, then across to the roofs of the Genesis Towers building and City Methodist Church. Most of the buildings damaged were abandoned before the fire and so, they were quickly demolished. The fire dealt a considerable amount of damage to City Methodist Church, collapsing most of the roof and accelerating the building’s deterioration. In 2011, a portion of the roof above the sanctuary caved in and thieves have removed most of the interior fixtures.

The city of Gary has a mothballed plan for the crumbling cathedral and it involves turning it into a ruins garden; a public park that could host weddings, performances, and special events. Flowers and other flora can make the area a little nicer. Signs could describe certain architectural features around the structure. A more stabilized and safer structure can allow people to wander around it who wouldn’t otherwise consider going in given the dangers involved. This plan was first introduced in the early 2000s and was brought up again in 2014, but after six years, the building is unchanged. In 2019, a historic landmark marker was installed explaining the history of the church. After decades of abandonment, the church remains a symbol of urban blight and a beacon to photographers and explorers around the country.