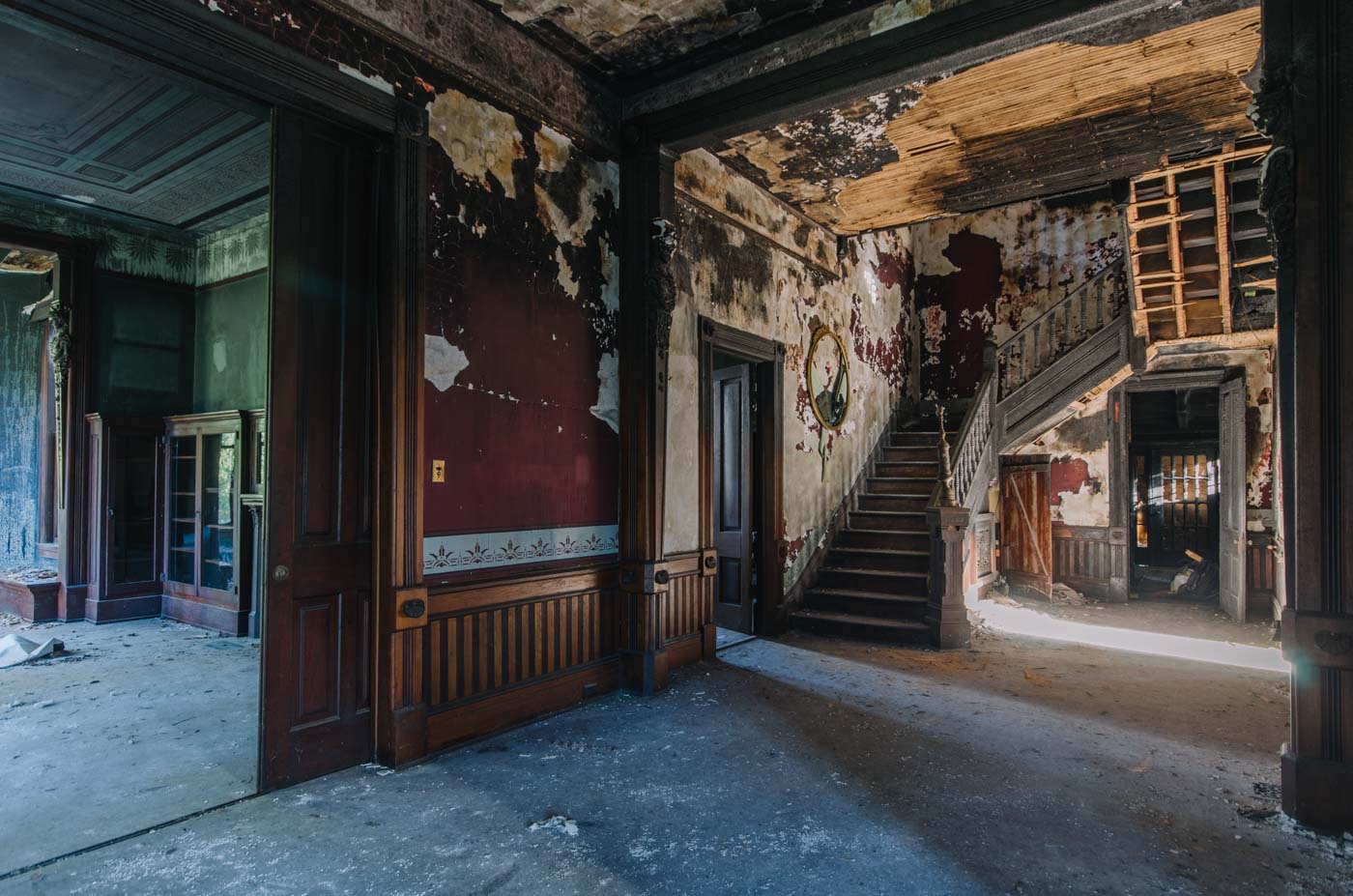 The Foster-Thomason-Miller House is a historic home located in the Madison Historic District in Madison Georgia, built by Legare H. Foster in 1883. It was later owned by Robert Usher Thomason and his family, and then the Miller family in the 1970s who restored the house to its former grandeur.

Incorporated on December 12, 1809, the town of Madison was described in an early 19th-century issue of White’s Statistics of Georgia as “the most cultured and aristocratic town on the stagecoach route from Charleston to New Orleans.” Madison boasts a large number of antebellum and Victorian buildings and today, has one of the largest historic districts in the state of Georgia. By 1850, Madison was established as an important educational center in the region, and around this time, two institutions were founded for the higher education of young women. One of these was the Georgia Female College, first founded in 1849 and incorporated by an act of the Georgia Legislature in 1850. Since its opening, the Georgia Female College served as a cultural marker for the town of Madison, hosting important town events and having libraries that were accessible to the public. Madison’s growth and prosperity was interrupted, like many towns in
the South, by the start of the Civil War in 1861. As a result of the war, the Georgia Female College was shut down in 1862. After the war, there was an attempt to revive the college and students began to return after 1873, but enrollment never reached its pre-war figures. When the school building burned in 1881, the college was disbanded.

In 1883, the property was auctioned off and sold to Legare H. Foster who immediately commenced construction of his house of the site. The exterior foundation of the house was laid directly on top of the old foundation of the former college. The Foster House was built on the grounds of the
former Georgia Female College. After serving as an important cultural marker for the town of Madison, the school was shut down in 1862 as a result of the war. An article in the December 1, 1883 issue of the Madisonian Newspaper described Foster’s newly constructed home as follows:

“Perhaps the most elegant country home in Middle Georgia is that of Legare H. Foster, in this city. Of all the attractive residences in Madison, this is the most desirable. A stranger to parsimony, this thrifty and comfort-loving gentleman has just completed, by contract, one of the most beautiful and costly residences ever built in this city. Daniel Townes, the contractor, a Madison mechanic, drew the plans and constructed the house. Every piece of work shows superior mechanical genius, and this edifice will for years be a monument to his skill and ingenuity. We hazard nothing of truth when we say that the most experienced contractor in any of the large cities in our State, could not excel in the work which was just completed. The residence is a beautiful frame building, situated on the old college lot on S. Main Street, with a dense shade of large live oaks in front. The front veranda is beautiful and novel in shape, there being a two-story bay window directly in front, making a desirable entrance to the lower hall, and a good ventilation to the upper. The two front rooms, parlor and drawing-room, have side bay windows and are elegantly decorated with frescoed walls, walnut and hardwood facings. The large folding doors are of solid walnut, and slide with ease which careful workmanship only can secure. The dining room is very elaborately finished with natural woods, as is the whole first floor —the blinds, the facings and wains-cotings being of ash and walnut. This room is beautifully frescoed by the artistic brushes of Sheridan Brothers, Atlanta. The staircase is a model of costliness and symmetry. The railing and facing are solid walnut. The “red room” on the second floor, is one of the prettiest rooms we ever saw, and is finished at great cost—being beautifully frescoed. The “walnut room” and “oak room”, the two rear rooms on the second floor, are beautifully finished in appropriate styles. We understand that Mrs. Foster will furnish these rooms with furniture adapted to correspond. The entire house will be lighted with gas. To sum it up, it is beautifully planned, handsomely finished, and does great credit to the skill of the contractor Townes, show up the enterprise of Mr. Foster—besides being an attractive acquisition to that part of the city. We congratulate our friend upon the completion of his home, and wish for him and his admirable wife all the happiness that can possibly bless two loving hearts.”

In 1889, the Fosters sold the house to Robert Usher Thomason, and over the next 90 years, three generations of the Thomason family would occupy the home. The exterior was repainted in 1905, and indoor plumbing and electricity were added in 1916. In 1974, the home was added to the National Register of Historic Places as a contributing structure of the Madison Historic District. In 1978, Richard and Marcia Miller purchased the home from the Thomasons and meticulously restored it, earning the Georgia Trust for Historic preservation award for residential restoration in 1986, the only home in Madison to earn such an award. In 2001, a fire broke out in the back of the house, severely damaging a rear addition to the house. Although the fire didn’t spread to the rest of the house, there was still significant smoke and water damage throughout the building. The property was sold to new owners in 2009, but no visible efforts have been undertaken to stabilize or restore the structure. A developer had proposed plans to build additional houses on the eight acres behind the home. While the Foster-Thomason-Miller house is poised to not be disturbed due to those plans, its rehabilitation is also not included in those plans. The Foster-Thomason-Miller house was listed on the Georgia Trust for Historic Preservation “Top 10 Places in Peril” for 2018; an annual listing that brings awareness to imperiled historic resources throughout the State. In 2020, the house was purchased with the intent of restoring it, so hopefully, it has a bright future ahead of it.