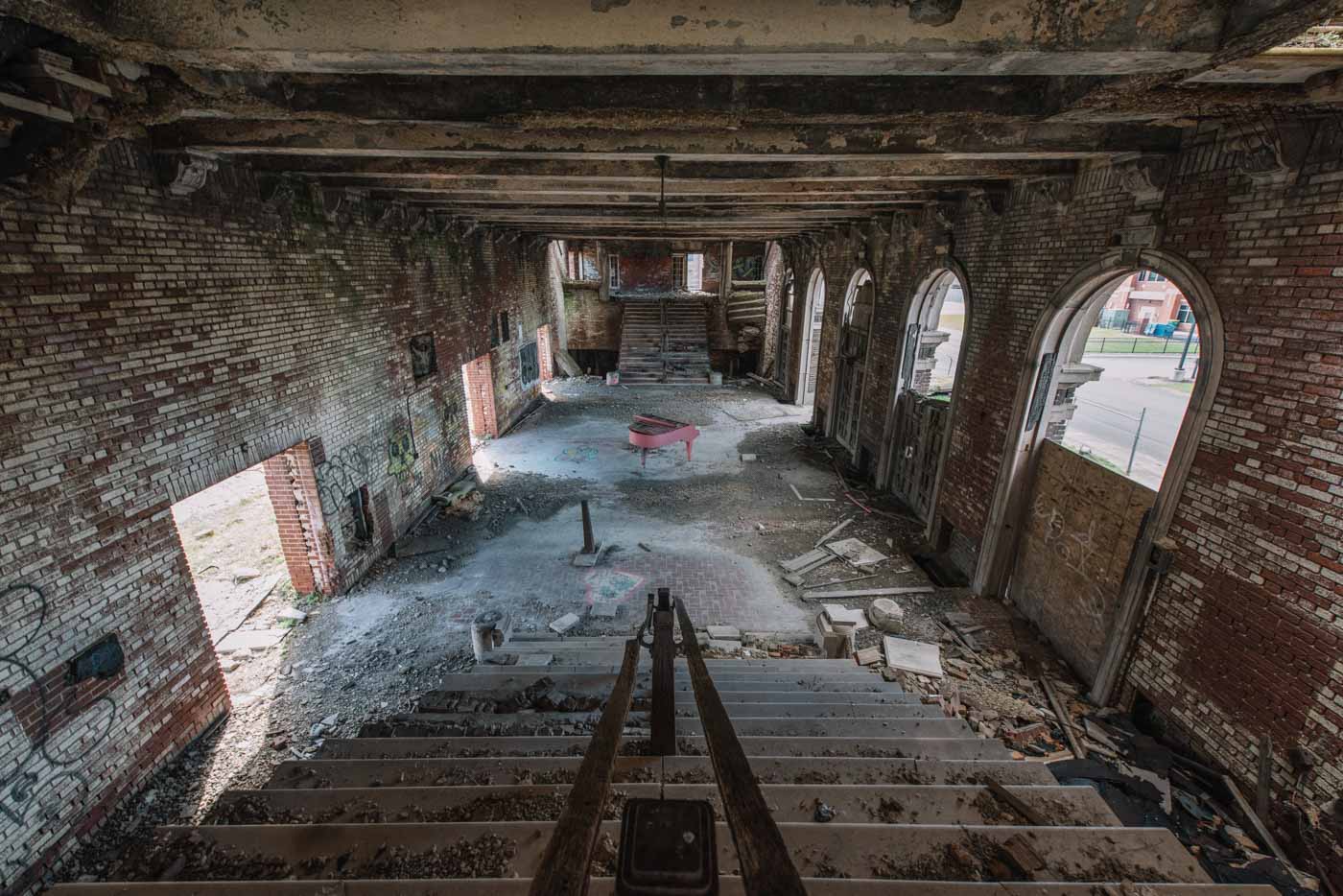 The Gary Memorial Auditorium is an abandoned civic center in Gary, Indiana, constructed to commemorate residents of the city of Gary that were killed fighting in World War I. Commissioned by the Gary Land Company, a subsidiary of the U.S. Steel Company, the building was designed by local architect Joseph Henry Wildermuth who had previously worked for the Gary School Board designing new school buildings.

Construction on the Memorial Auditorium was completed in 1927 at the cost of $5 million featuring a gymnasium and auditorium with a seating capacity of 5,000. The auditorium’s stage was the largest in the region at the time of its construction and the asbestos curtain was the largest of its kind. The building’s function was influenced by Gary’s first school superintendent William Wirt whose Work-Study-Play system of education drew international praise. The auditorium’s floor seats were removable allowing the building to be used as an art center, host school graduations, basketball games, music concerts, and boxing matches. Some notable events include the annual Golden Gloves Boxing Tournaments between 1939 and 1959, a performance by Frank Sinatra in 1945 in an attempt to ease tensions as schools attempted to desegregate, a campaign speech by President Harry Truman, and a city-wide talent contest held in the 1960s which the Jackson Five won first place in.

The Memorial Auditorium closed in 1972 as the city was declining. There were plans to reopen the building as a Sports Hall of Fame, a museum exhibit for local history, and a performing arts center, but the plans were scrapped after the Great Gary Arson of 1997. The fire began inside of the abandoned Goldblatt’s Department Store building directly north of the Broadway Shopping Mall, engulfing the Memorial Auditorium to the east, the historic Radigan building to the north, and across to the roof of Gary Public Housing Authority’s Genesis Towers and the abandoned City Methodist Church. By the end, eight buildings were either severely damaged or completely destroyed, and only one-fourth of the Memorial Auditorium remained.

In 1994, it was added to the National Register of Historic Places as a contributing structure of the Gary City Center Historic District. In 2013, the state historic preservation office determined that so little was left and that the building had fallen in such disrepair, that that it no longer contributed to the historic district. The Gary Redevelopment Commission acquired in 2016 and aimed to demolish the remains of the Memorial Auditorium to make way for new development. In 2019, it was reported that the building would be razed to be replaced with a 38-unit housing project for seniors and middle-income residents, but it wasn’t until August 25, 2020 that demolition of the structure began.