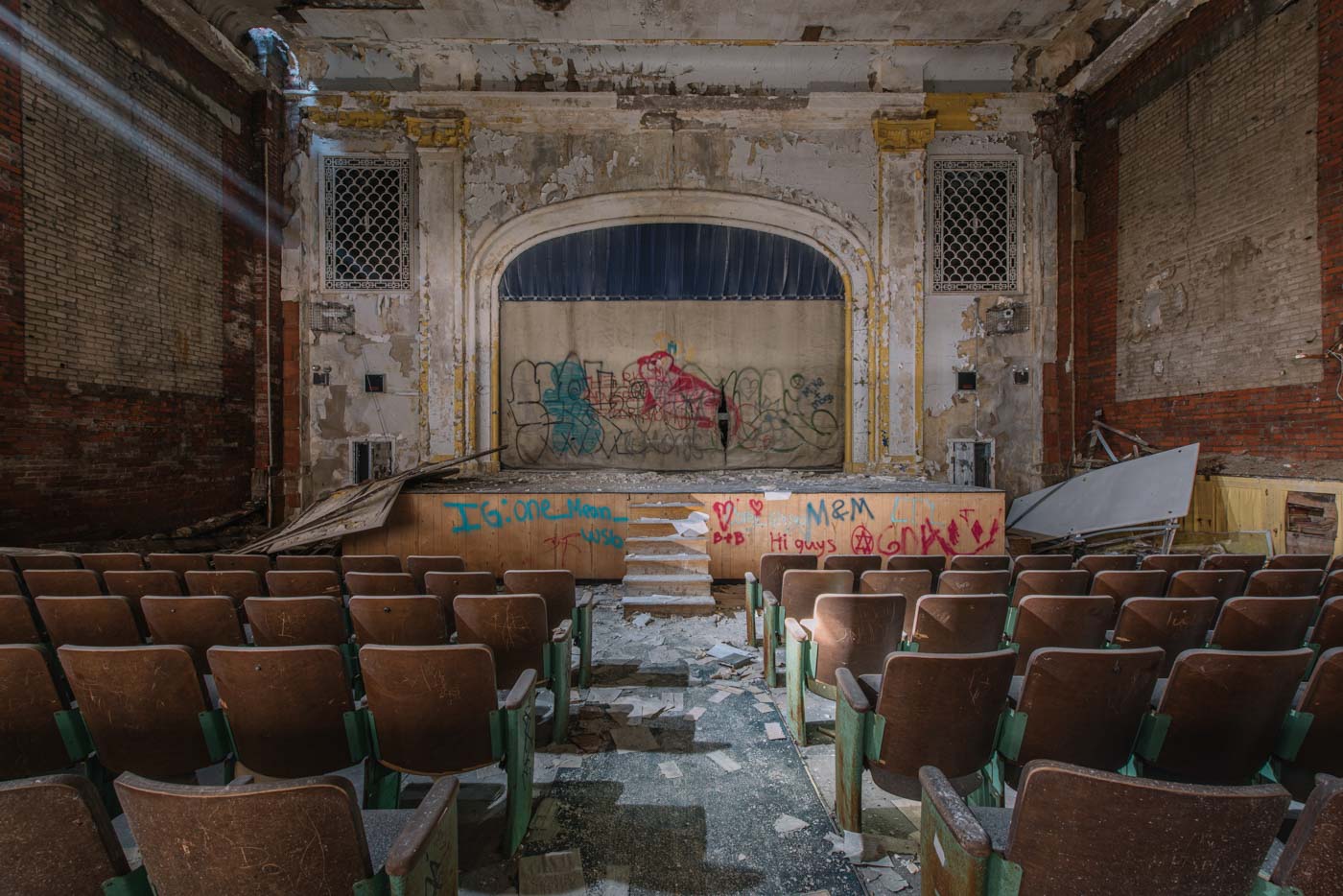 Bearing the name of transcendentalist writer, lecturer, and philosopher, Ralph Waldo Emerson, Emerson School was Gary’s first high school and was also the first public school in the city to implement Gary School Superintendent William Wirt’s new Work-Study-Play system of education. Wirt developed a “Whole Child” philosophy while assuming the post of school superintendent in the city of Bluffton, Indiana in 1899. He believed rapid urbanization occurring in the early 20th century threatened the rural values necessary for the total development of a child, those values being family, work, and productivity. When Wirt became superintendent of schools of Gary in 1907, he began implementing his values into the school system by initiating teacher hiring standards, lengthening the school day, and designing schools to meet his standards.

Built in 1909, Ralph Waldo Emerson School was designed by St. Louis architect William Ittner and included no less than what Wirt required to implement his new system: thirty classrooms, seven laboratories, art studios, band, and orchestra rooms, and rooms for industrial and household arts. The school also boasted an auditorium, a gymnasium with an upstairs running track, the first high school to have an indoor swimming pool, and even a student-run bank and zoo.

Wirt’s new system of education dubbed the Gary Plan and often referred to as the “platoon system”, called for students to be split into two platoons, the first utilizing the school’s academic facilities while the second platoon utilized the non-academic facilities such as the gym and swimming pool. The constant movement and rotating of students would be efficient in keeping all facilities in use at all times, thus reducing cost. Under the new system, school officials could schedule a student twice as large as before into the same space by rotating students between specialized teachers who would teach a specific subject on a precise time schedule.

At the time, the system was revolutionary but it wasn’t without opposition. In 1914, a group of students and parents ignited a rebellion against the implementation of the Gary Plan into the New York City public school system. For the next three years, the Gary school system faced resistance from parents, students, and labor leaders concerned that the plan simply trained children to work in factories and also for the fact that the plan was implemented in predominantly Jewish areas. In January 1916, the Board of Education released a report finding students attending Gary Plan schools actually performed worse. Despite the opposition, schools around the world today are still employing concepts from Wirt’s original system such as the multi-period high-school schedule, vocational-career education programs, and arts curriculum offerings we have today in the United States.

Emerson was originally an all-white school, but due to overcrowding in the 1920s, black students attended white schools for the first time. To alleviate overcrowding, Wirt approved the transfer of black students to Emerson; six black students attended Emerson in 1926 and another eighteen followed in 1927. The white community did not stand for it with the white student body staging a walk-out which eventually culminated into a strike. Over 1,300 protestors, students, and parents stood outside Emerson refusing to go back inside or disperse under the black students were transferred out. Wirt made the decision to establish a new school for black students, Theodore Roosevelt High School, and transferred the students out of Emerson. The issue of desegregation returned in 1945 when hundreds of white students walked out of the newly-integrated Froebel School, prompting a visit by Frank Sinatra to help ease tensions, speaking at the Gary Memorial Auditorium about equality and acceptance. In 1946, the Gary school board adopted a desegregation policy, but discrimination continued as Emerson’s white student body staged a second walkout in protest. It wasn’t until 1949 that Indiana state law desegregated public schools.

Due to a shrinking enrollment caused by the city’s decline, Emerson closed as a high school in 1981 and reopened as a magnet school. The school lacked identity as the community referred to the school as Emerson VPA, Emerson High, Gary High School, Gary-Emerson School, and the Gary School until 1987 when the name was officially changed to Emerson School for the Visual and Performing Arts. The school was renovated in 1998 which included the addition of a computer lab, new stage drapery and rigging, and the indoor swimming pool was filled in and replaced with a shower and dressing room.

By 2007, Emerson had deteriorated to the point that it was negatively affecting the health of the students and it was soon discovered that mold was the culprit. Old plumbing had sprung leaks within the ceilings and walls of the school. In March 2008, a major clean-up effort was underway as drywall and ceiling tiles were replaced, leaky pipes were repaired, new carpeting was laid out, and the building received a new coat of paint. The following month, an early evaluation of the school’s air quality brought positive news, and the school boards announced the cleanup was a success. A more-thorough evaluation was later conducted and found that not only the mold was still present, but it was much more severe than previously thought. With no funds left, the school board made the hard decision to close Emerson after serving the community for 99 years.

The building was listed on the National Register of Historic Places in 1995 but despite its status and history, the building has sat vacant since its closure. Over the years, the building has been heavily vandalized while many other schools in the city would close as well due to academic failures and massive debt incurred by the Gary Community School District. The Emerson School made national headlines in 2015 when a 17-year-old girl was found strangled to death in the building, spotlighting the immense blight the city faces.