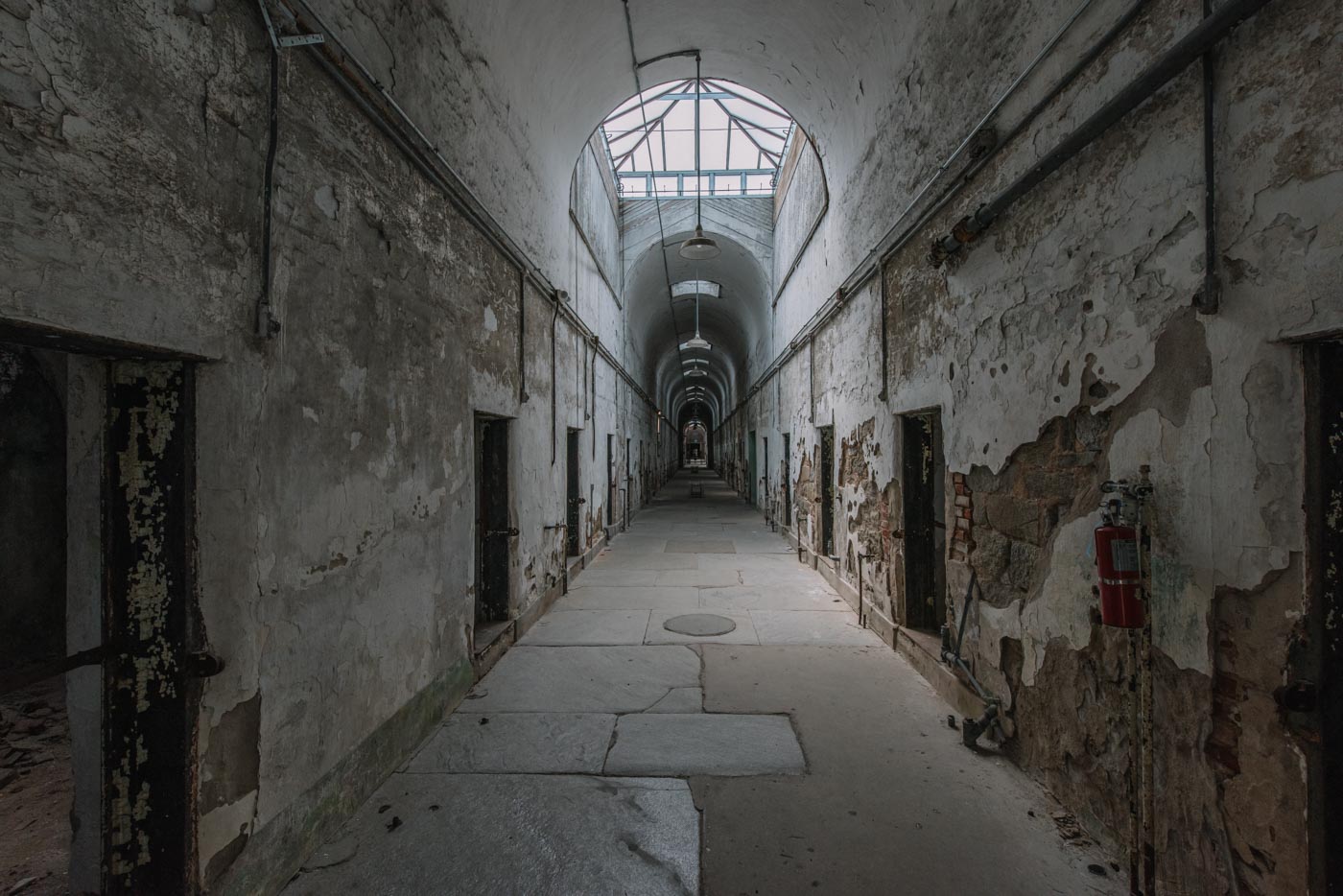 Eastern State Penitentiary was erected in 1829 and at the time, it was the largest and most expensive public structure in the country with a final price tag of $750,000. Its architectural significance first arose in 1821, when British architect John Haviland was chosen to design the building. Haviland found most of his inspiration for his plan for the penitentiary from prisons and asylums built beginning in the 1780s in England and Ireland. He gave the prison a neo-Gothic look to install fear into those who thought of committing a crime. Haviland was an influential architect of the time, having written a book called The Builder’s Assistant containing the five orders of architecture “for the use of builders, carpenter, mason, plasterers, cabinet makers, and carvers…”. The book was important as being one of the earliest pattern books in the United States and one of the first to include both Greek and Roman orders. Although his work varied, he is remembered as a prison architect, having designed a number of prisons after the success of Eastern State Penitentiary including New Jersey Penitentiary (1833-1836), and the “Tombs” in New York City (1835-1838).

The basis design of the prison consisted of an octagonal center connected by corridors to seven radiating single-story cell blocks, each containing large single cells with hot water heating, a water tap, toilet, and individual exercise yards the same width as the cell. But by the time cell block three was completed, the prison was already over capacity, so all cell blocks built thereafter consisted of two floors.

The “Pennsylvania system” was implemented in Eastern State, a revolutionary system of incarceration that encouraged separate confinement as a form of rehabilitation. Until 1904, prisoners entered the institution with a black hood over their head, so they would never know who their fellow convicts were, before being led to the cell where they would serve the remainder of their sentence in near-constant solitude. All contact with the outside world more or less ceased for Eastern State prisoners.

Each cell was lit by a single source of light either by a skylight or window, which was considered the “Window of God” or “Eye of God”. The church viewed imprisonment, usually in isolation, as an instrument that would modify sinful or disruptive behavior. The time spent in prison would help inmates reflect on their crimes committed, giving them the mission for redemption. In contrast to the Gothic exterior, John Haviland used the grand architectural vocabulary of churches on the interior. He employed 30-foot vaulted hallways, tall arched windows, and skylights throughout the prison, describing the building himself as a “forced monastery, a machine for reform”

Originally, inmates were housed in cells that could only be accessed by entering through a small exercise yard attached to the back of the prison; only a small portal, just large enough to pass meals, opened onto the cell blocks. This design proved impractical, and in the middle of construction, cells were constructed that allowed prisoners to enter and leave the cell blocks through metal doors that were covered by a heavy wooden door to filter out noise. In early years, most of the people imprisoned there were petty criminals such as muggers, burglars, pickpockets, purse-snatchers, etc. and first-time offenders often served two years. Notable inmates include Al Capone who served one year in prison in relative comfort at Eastern State, where he was allowed to furnish his cell with antiques, rugs, and oil paintings. Willie Sutton, a life-long bank robber was sentenced to 25 to 50 years at Eastern State for the machine gun robbery of the Corn Exchange Bank in Philadelphia. Sutton one of the twelves convicts who escaped the prison through a tunnel but were all quickly apprehended in which he was sentenced to life in prison and transferred to Philadelphia County Prison.

There were many critics of the Pennsylvania system, one noteworthy critic being Charles Dickens who recounts his 1842 visit to Eastern State Penitentiary in his travel journal, American Notes for General Circulation. The chapter titled “Philadelphia and the Solitary Prison reads:

“In its intention I am well convinced that it is kind, humane, and meant for reformation; but I am persuaded that those who designed this system of Prison Discipline, and those benevolent gentleman who carry it into execution, do not know what it is that they are doing….I hold this slow and daily tampering with the mysteries of the brain to be immeasurably worse than any torture of the body; and because its ghastly signs and tokens are not so palpable to the eye,… and it extorts few cries that human ears can hear; therefore I the more denounce it, as a secret punishment in which slumbering humanity is not roused up to stay.”

Eastern State officially abandoned the solitary confinement system in 1913 due to overcrowding and operated as a congregate prison until its closure in 1970, although it briefly housed inmates in 1971 after a riot at Holmesburg Prison. The City of Philadelphia purchased the property with the intention of redeveloping it. The site had several proposals, including a mall and a luxury apartment complex surrounded by the old prison walls. During this time, a forest grew within the prison walls and cell blocks. In 1988, the Eastern State Penitentiary Task Force successfully petitioned Mayor Wilson Goode to halt redevelopment. In 1994, Eastern State opened to the public for historic tours. Today, it operates as a museum and historic site and is open year-round. It was listed on the National Register of Historic Places on October 15, 1966, and was designated a U.S. National Historic Landmark on June 23, 1965.