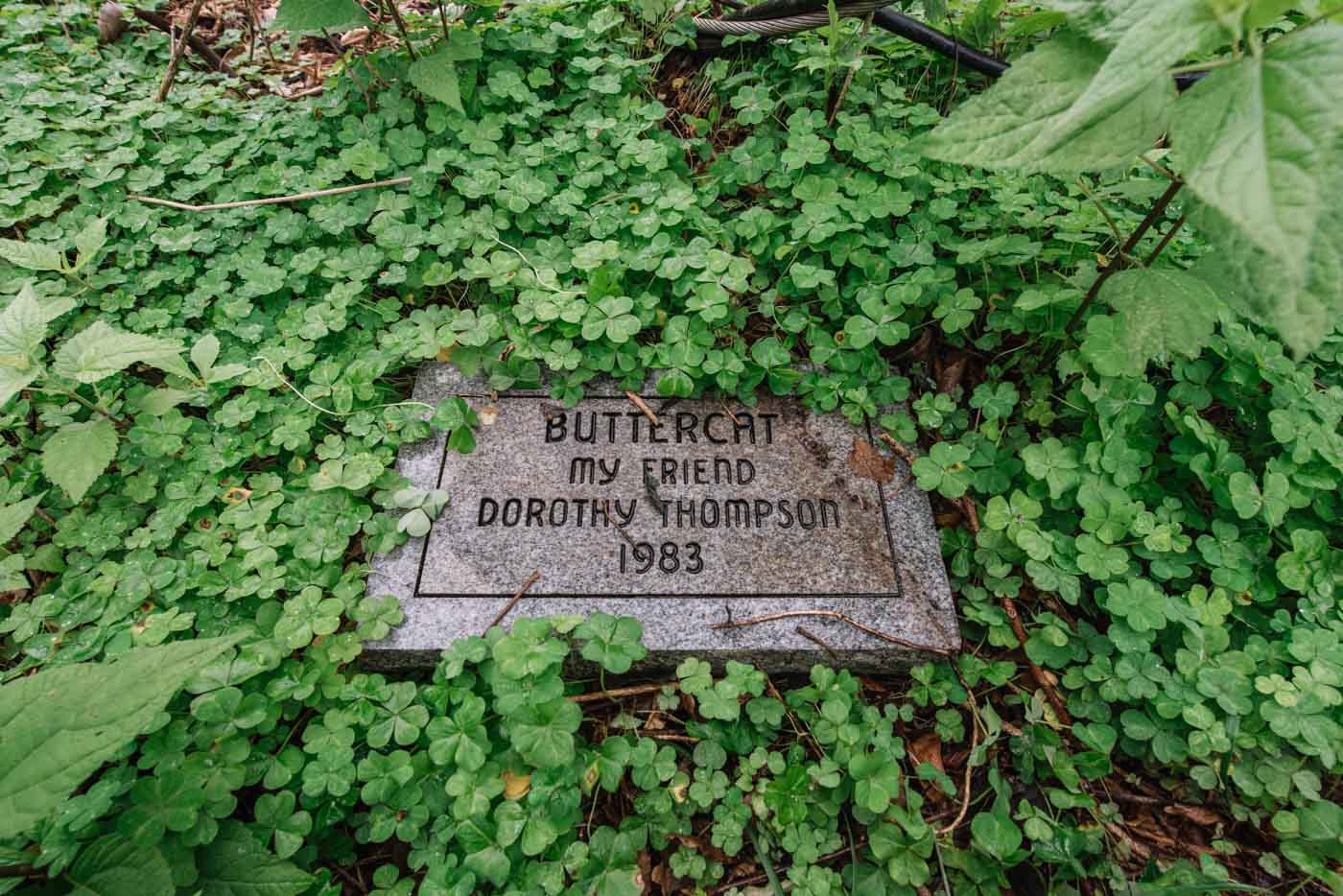 The Azalea Original Pet Cemetery was the site of multiple murders including the killings of the cemetery owner, Dorothy Thompson, daughter of the cemetery’s founder, Grace Wynne. The story begins sometime in the mid-1910s when Grace Agnes Matt married John “Jack” Thompson, both 22 years old at the time, in Kansas City, Missouri. Six years later, they divorced after Grace has an affair with Arthur Wynne, running off with him to Oklahoma City where they married in January 1920. In 1924, Grace gave birth to her daughter, Dorothy. Allegedly being Arthur’s child, Dorothy grew up calling Jack Thompson “Daddy Jack”, and used the Thompson name as an adult. Despite having remarried as well to Mary L. Thompson, Jack visited Grace often in Oklahoma City. Grace divorced Arthur in 1931 and moved back to Kansas City with Dorothy where according to court testimony, Jack had become “an influential politician, a successful operator of slot machines and a man of considerable means.” Jack was supposedly one of the top men in Tom Pendergast’s organization, a political boss who controlled Kansas City and Jackson County, Missouri, who was known for rigging elections, paying off police, running gambling houses, and smuggling alcohol during the Prohibition-era.

While in Kansas City, Grace lived at the Pickwick Hotel, with Jack paying the bills and showering her with money and gifts. Jealous of Mary Thompson and wanting Jack all to herself, Grace waited in the shadows outside of their home in Kansas City. On September 13, 1934, Mary and Jack were returning from vacation when Grace ambushed her, shooting her five times with a .25-caliber pistol. A witness later testified in court that Grace was calm after the murder, saying, “You don’t have to hold me. I am not going to run away. It is all fixed. They won’t do anything to me.” Grace was declared insane and was committed to a lunatic asylum in St. Joseph, Missouri.

Just six months later, as doctors were ready to deem her fit to stand trial, Grace was allowed a leave of absence to visit her mother at a hotel in town. She then fled to New Orleans with her mother and Dorothy. On December 3, 1935, Jack Thompson arrived in New Orleans to meet with Grace but died that night in the Jung Hotel on Canal Street. Though it was ruled a heart attack, many found it very suspicious. Grace claimed to have never met Jack that evening and that he was killed for his “hidden fortune” of $400,000 to $500,000, which was reportedly never found. The following day, Kansas City authorities asked New Orleans police and the public to be on the lookout Grace Wynne, who was hiding out somewhere in the city, except she wasn’t hiding at all. Grace had opened up the Cottage Flower Shop and became an organist at the
Our Lady of Lourdes Church, where she composed a number of hymns and published a book in 1939. The hymnbook was used by church organists throughout the world and would later lead to her arrest. On July 27, 1940, Kansas City tracked Grace down due to the popularity of the book she published and arrested her at her flower shop. Louisiana Governor Sam Jones ordered Grace’s extradition to Kansas City and in 1942, was convicted for second-degree murder and sentenced to 15 years in prison.

On September 5, 1944, The Missouri Supreme Court ordered a retrial due to a technicality, scheduling the trial for the following month. Grace was released on bail and fled once again to New Orleans. During an extradition hearing in 1945 in front of Louisiana Governor Jimmie H. Davis, Grave and her attorneys argued that enemies of Tom Pendergast were the ones pushing for her extradition back to Kansas City claiming that they weren’t really interested in the murder charge and instead, they wanted to know the location of Jack’s hidden fortune. Davis denied the extradition request.

By 1946, Grace, her mother, and Dorothy had moved to the Toca Plantation located in on the banks of Bayou Terre aux Bouefs, a channel of the Mississippi River in St. Bernard Parish. Back on March 22, 1845, plantation owner, Phillipe Toca faced off in a duel with his rival, Gilbert Leonard. Standing 50 yards apart, each loaded their guns with a single bullet and fired, but only Toca’s shot landed, killing Leonard on the spot. This killing was appropriate considering the deaths that would soon follow Grace and her family.

By the time the two moved there, Toca Plantation was nothing more than an abandoned sugar cane field with a large Edwardian house at its center, built in 1909 by St. Bernard Sheriff Albert Estopinal Jr. Dorothy later recalled that her mother “had the idea of a pet cemetery in the back of her mind ever since a dog of which she was very fond of died in Kansas City, and there was no place of burial there.” The sugar cane field was converted into a pet cemetery and by 1952, Grace was running it full-time. It was referred to as the E.E. Matt Cemetery, after Grace’s mother, Emma Matt, and the Azalea Original Pet Cemetery, for the 12-foot azalea trees that grew alongside the tombstones. There are an estimated 5,000 pets buried in the cemetery, mostly cats and dogs, but also parrots, rabbits, monkeys, hens, at least one cheetah, and a boa constrictor named Serita that performed on the “The Tonight Show” the in 1960s.

On November 26, 1970, Dorothy fatally shot her first husband, Logan Banks, in the rear of the cemetery. According to the police report, Dorothy claimed Banks was intoxicated and threatening to kill them with a large knife. St. Bernard Sheriff’s officials determined the killing was in self-defense and no charges were filed. In 1976, Dorothy married her second husband, Donald Robinson, a caretaker on the property. Less than two years later, Robinson was also fatally shot at the cemetery. Dorothy called the police and told them she had found him dead. Again, no charges were filed.

Grace Wynne died of natural causes in August 1979 at the age of 88. A few months after her mother’s death, Dorothy hired Brandon Nodier to do home repairs and as a live-in caretaker. Brandon Nodier has had some troublesome times throughout his life. In 1961 at the age of 7, Nodier witnessed a former mental patient shoot his father three times in the head as his father slept. At the age of 18, he was convicted of burglary in New Orleans and sentenced to five years of probation. By the time he met Dorothy, Nodier was known as a con artist and a swindler to those living in the area. Dorothy fell into a stupor after her mother’s death and admitted to having a substance abuse problem later in life. In 1981, she signed over a 99-year lease with Nodier through his company, Brandon Renovations Inc., for a mere $20 a month. In 1984, Brandon and his ex-wife Bonnie, fooled Dorothy into signing over the cemetery to them for $20,000. Later that year, Dorothy filed a lawsuit against Brandon and Bonnie alleging she was tricked into signing the sale papers.

The pretrial was scheduled for April 26, 1985, but Dorothy went missing on April 13th. On May 2nd, her partially nude body was found by fisherman, miles away from the cemetery in the Mississippi River, wrapped in heavy steel chains and a garbage bag tied around her head. Police determined that she was killed in her house at the cemetery and then dumped in the river. In November 1988, the lawsuit was resolved with the judge ruling that Dorothy’s heirs own the pet cemetery property. Patricia Newman, who had been friends with Dorothy since 1980, became the executor of her estate.

Always suspecting Brandon Nodier was the one who killed Dorothy, police could not find enough evidence to build a case against him. The case went cold until around 2009 when witnesses began coming forward with information on Nodier in accordance with Dorothy’s death. According to police, witnesses spoke of nightmares and seeing Thompson’s ghost, the guilt pushing them to come forward. Nodier surrendered to the St. Bernard Sheriff’s Office on April 25, 2012. At the time of his arrest, officials said Nodier’s record included burglary, drug charges, aggravated assault, and multiple illegal weapon charges. Witnesses who came forward also linked Nodier to other killings in New Orleans.

The pet cemetery is still there, abandoned, and overgrown. Patricia Newman had tried selling the property for years, but no one has been willing to clean it up fearing tombstones hiding in the weeds would ruin their lawn equipment or that graves had opened up due to Hurricane Katrina. Police are often called to the cemetery to chase off kids who were drinking, doing drugs, or simply just hanging out. Tombstones have been stolen from the property and the house has caved in the past decade. Treasure hunters are a regular sight as well, walking the grounds with metal detectors hoping to find Jack’s hidden fortune, rumored to have been buried there by Grace long ago.